Seventeen-year-old Allely is living with severe scoliosis/cancer/heart defect. Her wish was to meet Jack Maynard, a British YouTuber famous for his self-titled channel where he posts vlogs, challenges, and comedy skit videos for his 1.5 million subscribers. Jack is part of "The Buttercream Squad" a group of best friends and YouTube influencers based in the UK.

As Allely went through treatment, confined to a hospital bed, she watched Jack's and the rest of the Squad's videos online - which helped her feel connected with the outside world. Allely says: “There were countless nights when Jack’s videos were the only thing that would stop me thinking about the awful things I was living through – he made me laugh and made me feel part of something.”

Alley knew that once she was well enough, her wish would be to meet Jack in real life. Allely travelled to London to meet Jack in person - a powerful moment in both their lives. Jack was a terrific host, showing Allely around the sights and inviting her as his special guest at the final show on his 'HEADLINES Tour' where he performed parody and original music with his band 'Goat', followed by a DJ set to a crowd of enthusiastic fans, a truely unforgettable night for Allely!

The effect this unique and special wish has had on Allely has been life-changing, helping her find renewed confidence and forming personal connections with the people that supported her through her darkest times.  Since their meeting, Jack has kept in regular contact with his new Kiwi friend, sending Allely messages and personalised videos which has strengthened their bond.

Allely is now cancer-free, but continues to bravely battle scoliosis.  After her most recent surgery, the positive effects of the wish journey has helped Allely make a swift and progressive recovery – allowing her more movement than before.

Jack, so moved by his experience with Allely's wish, is now an official Ambassador for Make-A-Wish UK.

Allely became a YouTube hit herself when their meetup was featured in an episode on Jack's YouTube channel, viewed by around 72,500 fans to date.

Our Thanks to Make-A-Wish UK and Jack Maynard for assisting with this very special wish. 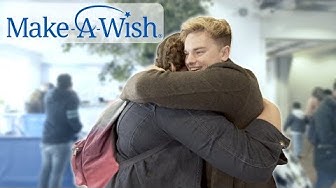